TSC Behind The Decks | Matador 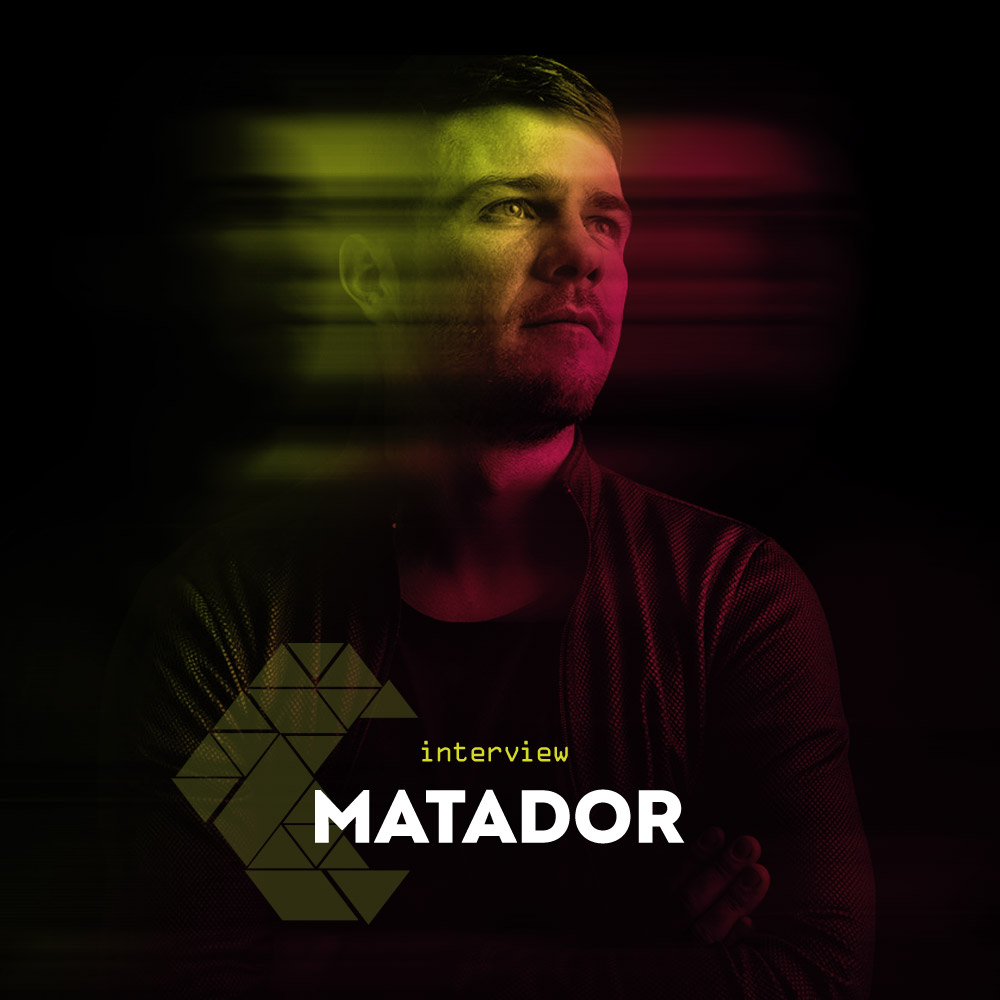 TSC Behind The Decks | Matador

Matador aka Gavin Lynch is a revolutionary live artist and music producer with a shining reputation for versatility, whilst never compromising on quality. As a teenager inspired by electronic giants Richie Hawtin, Adam Beyer and Jeff Mills, he listened faithfully to BBC Radio 1’s Essential Mix, collecting records and learning to DJ on any pieces of equipment he could afford. His drive to learn more led him to a sound engineering course at Dublin’s Sound Training Centre, with an emphasis on electronic music production, and an obsession was born.

‘Whilst electronic production is my first love, it has been incredibly important to have knowledge of instruments in their purest form both in a studio and in a live environment.’

His success was assured by his string of successful releases there such as ‘Kingswing’ and his ‘Spooks’ EP, and by his innovative, ever-evolving live shows.

His early twenties were spent training as a chef to the point of a promising career in Dublin’s Michelin starred restaurants. Following his Dad’s advice of ‘find something you love doing and you’ll never work a day in your life’, he split his time between the kitchen and the decks, before cooking became a much loved hobby and music his life’s work.

The Sound Clique caught up with Matador after his latest release “Wildside” on Hot Creations, and had a chat about the latter, his transitioning from Minimal Techno to Techno and Ambient, as well as how is live for him post COVID-19.

Hello Matador and thanks for having me in today’s interview. Where am I catching you and what have you been up to lately?
I’m doing well thanks! Currently at home in Dublin, where my studio is also based. I’m writing music at the moment, I’ve been working on a new album for the last couple of months and alongside that, relaxing and recharging.

How did you get into music? What was the turning point for you?
I grew up in a Motown house, my parent’s favourite music, and from there to disco, R&B, pop, rock, and then electronic, my tastes span all genres really. As a young teen I was big into Guns N Roses, Pink Floyd, Kasabian. I guess my first exposure to electronic music was via radio, listening to Radio 1 mostly, the Essential mix with Pete Tong, and various other shows with Fergie, Judge Jules, John Digweed…..and then a series of different mix cds from, Dave Clarke’s ‘World Service’, to Richie Hawtin’s ‘909 Decks & FX’ & Carl Cox’s ‘Fact’ series. I got my first set of turntables when I was about 15 and was hooked.

After being for so many years in the industry, what is your source for inspiration?

I find inspiration from pretty much anywhere; it could be the television, the sounds in an airport, natural birdsong, road traffic, or just sitting down with a synth and exploring its capabilities.

It’s not something you can force, sometimes I could spend days writing a hook, sometimes it just clicks and I could have a track sketched out in an afternoon.

After transitioning from Minimal to Techno, and recently going about releasing an Ambient album. Why the rapid change and do you see yourself continuing producing music in the same direction?
I tend to write music according to how I’m feeling at a particular time, some projects flow more easily than others, but I’ve learned to let things happen organically, it’s all part of my journey as a music producer.

I enjoy all genres of music and so I like to write across all genres.

I think this is important as an artist, it pushes me to be the best I can be and keeps things interesting for me as much as everyone else listening.

As mentioned, you recently released your new Ambient album “Tuesday”. What is the story behind this album, and can we expect more Ambient and experimental productions from you in the future?
I had a dinner with friends planned in LA so I wanted to write something that was easy on the ear whilst we ate, or whilst reading, travelling, or generally just chilling out. Initially it wasn’t something that I had planned on releasing as a collection, it was pretty much just for me, but I’d sent it to a couple of artists and friends and they enjoyed it, so I decided to release it as stream only.

I gathered some of the bird song on walks with my dog, put microphones out on the balcony for hours to see what I could pick up, and sat in the forest at Deerpark with my phone to capture the wind through the trees. Evening strolls along the shoreline at the beach, timed with the tide coming in, enabled me to record the sound of the waves lapping on the shore. So I had a pretty extensive collection of field recordings which I could place in some of the tracks I’d already written, and then some which inspired tracks that I wrote around them.

I’ll keep experimenting, for me, it’s just part of producing music. When I’m cooking/eating dinner I know that it’s important to have a varied diet, so it’s the same with writing music, I have to feed my soul with something else for a couple of days.

You recently released “Wildside” on Hot Creations. A release that sparked to life last summer in a hotel room in Ibiza. How did the release come about to be released on Hot Creations and what story did you want to tell with the “Wildside” release?
Yeah, this EP was started in a hotel room in Ibiza at the height of summer so it’s very indicative of my time on the island.‘Wildside’ is pretty much dark sweaty nights at DC10 and ‘Sweet Release’ is more of a beach party vibe.

It’s probably the furthest I’ve delved into the tech house genre from the core Matador sound.

I started playing with Jamie Jones and the folks at Paradise in Ibiza about four or five years ago, and I’ve always got on well with that whole crew, and I’ve had great fun at their nights both as a fan and then playing at them. I’m a big fan of Jamie’s and Lee Foss’ productions, really great stuff from the lads and we’ve talked a lot about doing something together on their label, because I was playing at the parties, so it feels like a natural home for the tracks.

What are your favorite warm-up, peak and closing tracks at the moment?
Going back to the sets I was playing before the lockdown:
I was opening with Abut (The Drifter Remix) – Alex Preda, for peak time; DUNNN – Skream, and I’d been closing with my own Model 10

How did you spend your time in lockdown? From your Socials we saw you were quite productive in the studio. Are we going to see more releases from you this year?
I’m spending my time writing music – a new album, working on some cool collabs, walking the dog, and catching up on some sleep. Doing a lot of cooking…and eating! Watching old movies and tv shows, and spending some much-needed time with family. And spinning about on my bike and electric scooter.

What is the feeling for you, not being able to perform live, in front of people during the global pandemic lockdown? Moreover, do you reckon that the clubbing as we know it, is a thing of the past after the Covid-19 pandemic?
I’d been considering taking a break from touring to allow for a longer stint of writing in the studio, and with lockdown that’s sort of been handed to me, so I’ve embraced it. It’s been nice to be able to work on music at my own pace – touring every weekend I find that it’s harder to get straight into studio mode on a Monday, my ears usually need a rest from music. I am looking forward to getting back out on the road though, connecting with fans and friends, and testing out the new music. I think there will definitely be a change in how we enjoy music in a live environment, there’ll be different practices and procedures in place at venues and clubs with regards safety for sure. But I feel that the spirit of clubbing will remain and I’ve no doubt that we all want to be able to dance and enjoy ourselves again, we’ll just be more considerate in how we do that.

What are you working on next? When can the fans expect to see Matador live again, after the Covid-19 lockdown ends?
So the album that I’m working on at the moment will form my new live show for after the lockdown, realistically that’s going to be 2021, with a focus on hardware on stage and a new visual concept. I’ve some exciting collaborations coming up, again for 2021, which I’m really looking forward to and I’ll continue with Dj sets as I really enjoy playing and supporting other artists’ music too.

As we are wrapping up, one last question. What do you hope for in 2020?
I hope we respect and support each other as we traverse this pandemic. Now, more than ever, we should be kinder to ourselves and the world around us.

Thank you for the interview Matador. Stay safe!
Thank you, best wishes for all and keep safe too x