TSC Behind The Decks | Jamie Roy 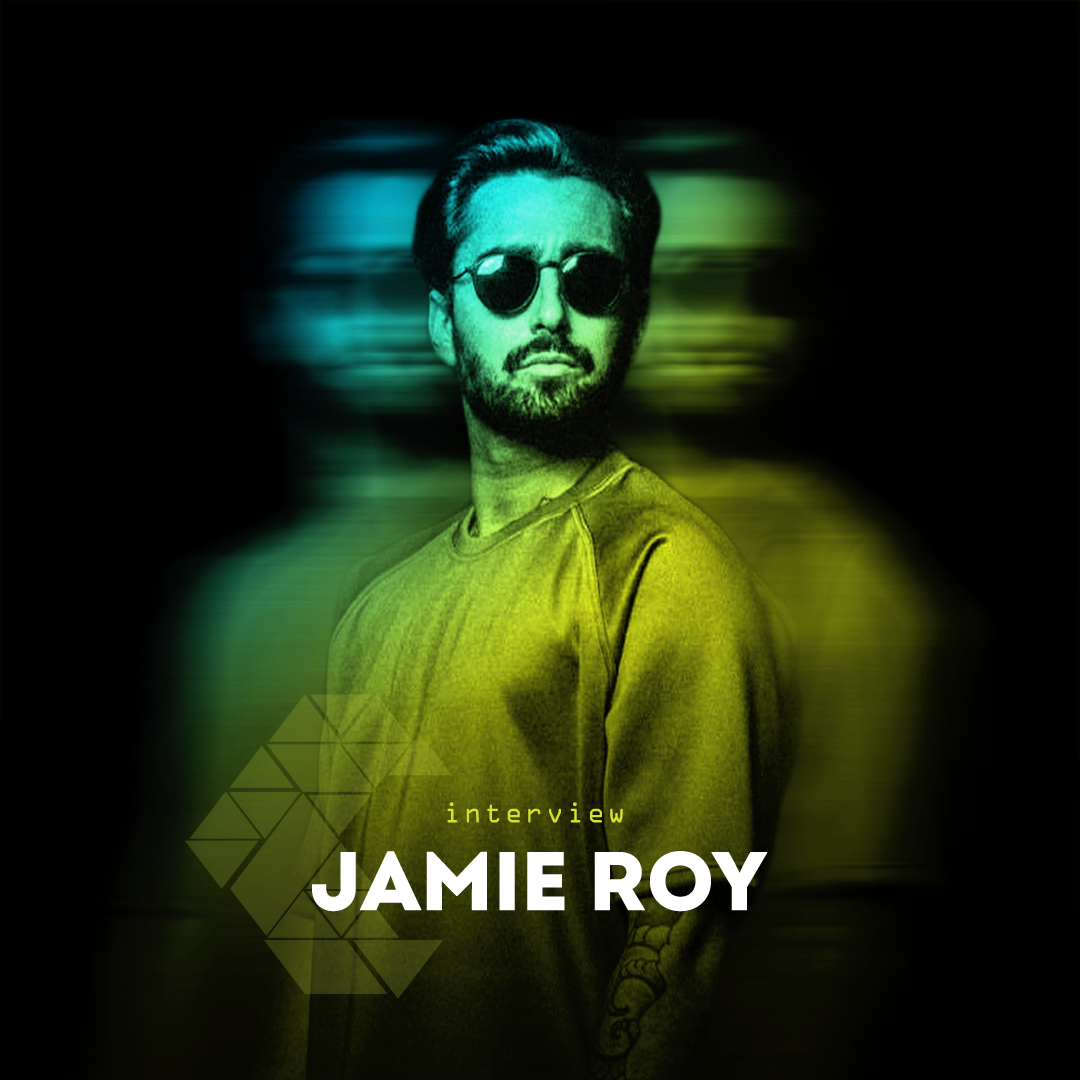 TSC Behind The Decks | Jamie Roy

Native to Scotland but infamous in Ibiza, Jamie Roy lives and breathes everything that is electronic music- and that’s pretty clear when you meet him. His unbridled passion for clubbing and music has landed him residencies at Do Not Sleep, Cuckoo Land Ibiza, Viva Warriors- just to name a few. During UNUM Festival in Albania, a couple hours before his set, we got the chance to catch up and chat about his early days getting started as a DJ in Ibiza, driving around with Green Velvet and the unreliability of the music industry under corona. Jamie and I coincidentally met backstage to Alci’s set the night before our interview, which very nearly spoiled the questions I had prepared because we ended up chatting and dancing the rest of the night.

We did actually do a voice recording of this interview, but on reflection of the fact that neither of us had gotten our 8 hours, husky voices from shouting over bass all night and a Scottish + Australian accent mixed in- a transcribed interview was by far more understandable.

Keep in mind this interview took place before his set at UNUM (and before he went on to show Albania how you really throw an after party for a festival. You’ve probably already seen it all over Instagram).

All right Jamie, thank you for joining us! Can you tell us a little about how you got involved with UNUM Festival?

So you guys go way back?

Yeah to get something like this from your friend- to play for his festival. It’s a massive thing for me. Massive.

Now I can see on your instagram that you’ve got your van packed and ready to go back to Ibiza, I understand that this isn’t your first road trip from Scotland to Ibiza, are you just a really good friend of the environment or is there something special about the drive for you?

So that’s actually what I did before I started DJing! So I went to my first season in Ibiza and I just sold tickets. Like I got a job doing the driving for Space Bar and that’s how I got into DJing.

You’ve also driven around with a couple big names like Green Velvet and Hot Since 82!

That’s the connections I made from being in Ibiza. It’s the reason I was signing tracks to different labels, these things would never have happened if I didn’t do the driving with these guys, like you’re not going to get more personal than the driver you know?

Yeah I bet you were an ear for all the problems! Have you got any little driving anecdotes or funny stories?

Oh my God, funny stories with the driving? Yeah. I don’t think we could ever tell them…

But actually the Green Velvet one is amazing! So if you’ve met Curtis- he’s amazing- like when there’s a song playing on the radio, he just starts singing over it. So I just started recording, because with his vocals he can sing on anything. And he’s just like singing about going back to his hotel and eating breakfast and drinking champagne.

So have you sampled some of his vocal into your own tracks?

Oh I’d love to but he needs to let me first! I’ve just signed an album deal with Sony and Ultra, and everything sample wise has to be cleared, so it can be a long process but it’s done properly.

What’s your favourite sample that you’ve had so far?

Well in my latest release was a sample of Chris Brown would you believe? So we had to clear his vocal and it was a long, long process, but they came off really well.

It seems you’ve made a lot of friends through the industry in Ibiza, are there any of them you feel you’ve made a really close connection with?

Yeah, one that stands out is Skream for me, he’s been in there from the start. Im signed to his label and like anytime I need advice on something new, then I’m going to ask him. He’s been there, done everything.

How did your first gigs come about? Like how many like high school parties did you have to play at before you got paid for it?

Yeah, a lot! But like it happened really fast for me, so I was DJing at home in Scotland and decided I’d just go to Ibiza and see what happens. And then just because like I went out selling tickets every night. So I met everyone, I know all the faces. Then I got like a residency with Warriors in 2015.

So you basically landed your first gigs with a friendly face and a coy smile?

That was the thing, they needed someone is going to get everybody to come in and party. So like that’s where it started and then it sort of snowballed musically from there.

So when you’re playing in different venues, do you curate your playlists based on your audience to match the scene?

100%. For something like UNUM… I’ve been planning this for two months like this set is going to be one of my favourites. Like my own take on like what minimal is, I’m proper exited, my usb is burning right now up stairs.

I bet it is! We’re so keen to see you play! One thing we did speak a little about last night, have you been able to notice a difference in the crowd here? Like with the people and the atmosphere?

Yeah 100%, people have not done something like this for like fifteen months. I had like a little bit of anxiety like coming into the whole situation. But you just jump back into it like muscle memory, I’ve just been saving up my chat the last 15 months! And because the music is like twenty four hours it’s perfect, they don’t like smash up the sets because they get like two or three hours each, they cater for the next DJ.

Thats so true, its’s seriously fantastic here. Who’s been your favourite so far?

Well you know what, it was this morning! I only got home three hours ago. Like Matthew Johnson this morning was unbelievable. I so got caught up in it, I wanted to leave but like the music was so good. I had to stay.

If he was here right now would you kiss him?

Is there anything like in particular you want to achieve while you were here at UNUM like a personal goal or something?

Like the networking side of things like because we haven’t done that for so long. I started to second guess my whole career in the last fifteen months, I’ve done all the seasons in ibiza and then corona hits and, boom, you have nothing. It’s quite scary. You’re like ‘are you going to get the bookings straight away? Are promoters going to know your name?’

Working with Sony since lockdown has kept me really busy, so not touring and stuff- has mad me feel so lucky to have the studio in Manchester to go to everyday. Like 9-5 everyday. Compared to pre corona when I was just partying, and I don’t really want to just be the party guy, I want to concentrate on my music more.

Of course, it’s a very social and physical career you chose, so if you’re sent home to Scotland for fifteen months, suddenly your network vanishes

Yeah so all you’re able to do like in lockdown is social media. Like try to release tracks, but then you question should I even release tracks during a pandemic because I can’t even play them? But if you’re not posting on social media, it just seems like you don’t exist anymore

Have you been able to collaborate with any radio stations or do live streams during lockdown?

Yes, I did like a big mix for BPM- the guys in Costa Rica, so that was my last gig. And then like the week after, everything had to shut. I had like 15, 16 gigs all booked like in the next three weeks and then boom nothing. So you just you sort of worry like is it going to come back?

Well yeah performing from your lounge room has its limitations! But if you could host your own event or festival, what would you call it and who’s coming on stage with you?

I would do it in Scotland and what would I call it?……

(Over WhatsApp a couple days later it was decided that it would be called Roy’s Rave and that all his mates would be up playing with him.

“As my second name isn’t actually Roy it was my dad’s first name and my middle name, so everything I do is a little tribute to him in a way as he passed away 10 years ago in May. So always like to use Roy in everything- will be in my label too”)

Now a couple quick questions to round us off. What’s one element of  raving/ partying/ festivals that you think, fuck that, leave it in 2019.

Nope, everyone says that!

Yeah I like hip hop, but not so much the newer stuff- I like everything from like old school and old Eminem and Dr Dre and stuff I used to be really into that before I Dj’d and like, I used to love Limp Bizkit

Do you have a festival staple that you absolutely must have with you?

Solid advice, I’ll remember that. Jamie, thank you so much for joining me today! Absolutely buzzing to see your set later.

Hahaha no problem, see you out there!