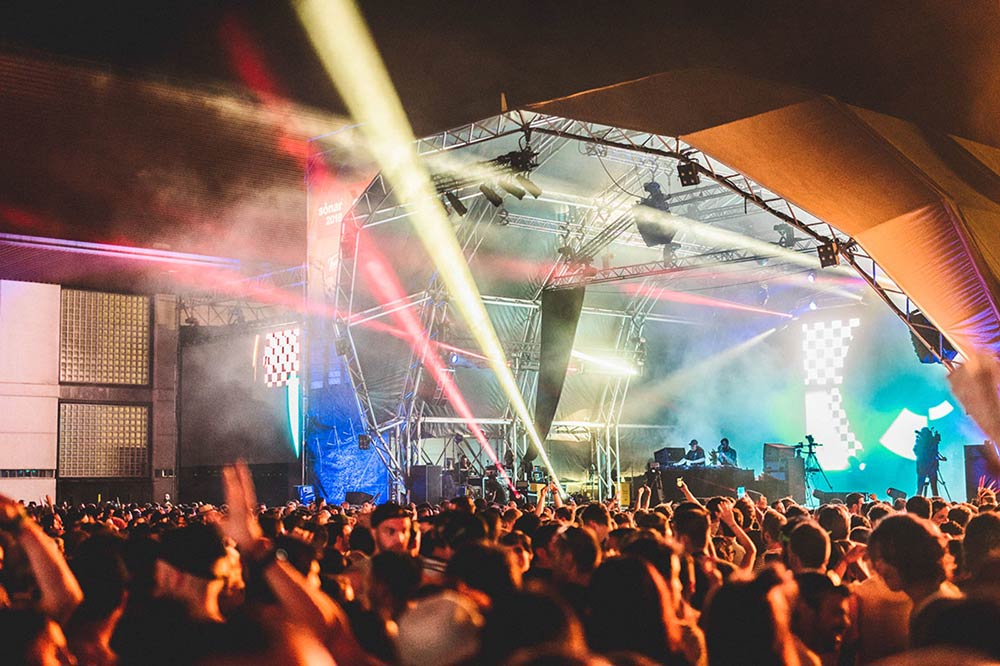 Bonobo and Band LIVE was surely on top of Sonar Festival 2018 highlights. A performance with a full 12-piece band, including a string quartet, guitar, keys, drums and the majestic vocals by Szjerdene Mulcare- in other words taking live electronic music to a new level. Bonobo and band composed a fusion of shifting soundscapes from jazz, to electronica and classical. The result was a music feast for the soul, ears and eyes. Playing “Bambro Koyo Ganda”, one of the more upbeat tunes from Bonobo’s latest album “Migration” turned Sonar Festival’s main stage into a massive club, with the crowd exploding. Followed by the live versions of “Kerala” and “Cirrus” before closing the performance with “Know You”, under the strong applause of the electrified and enthusiastic crowd.

Bonobo and band LIVE was a collective effort where the music is the winner and the crowd was in for a true spectacle.

Bicep LIVE, a relatively rare live performance amongst the current live electronic music scene, being one of the not so many artists to have build up their show atop their own productions. One of Bicep’s biggest skill is in building up melodies that ping-pong around before resolving with gigantic satisfaction. The perfect example was when Bicep played one of their biggest tunes from their debut self-titled album – Aura. Other highpoints of the set included “Just”, ‘Orca’ and ‘Glue’ which drummed the crowd into a collective euphoria.

For six hours on Saturday night, DJ Harvey turned SonarCar into a nightclub. Playing one of the festival’s longest slots, the veteran kept it smooth and steady, blending tribal-tinged house tracks with sun-kissed Balearic. Where many festival DJ sets are about high-impact bangers mixed in quick succession, Harvey let the tracks play out, mixing them with smooth transitions and a steady hand. This created a relaxed vibe in the crowd, so instead of everyone facing the front of the stage, friends huddled around in groups, dancing with their backs to the DJ. The closest Sónar came to a sunset beach party, Harvey’s six-hour slot was a masterclass in restrained festival DJing.