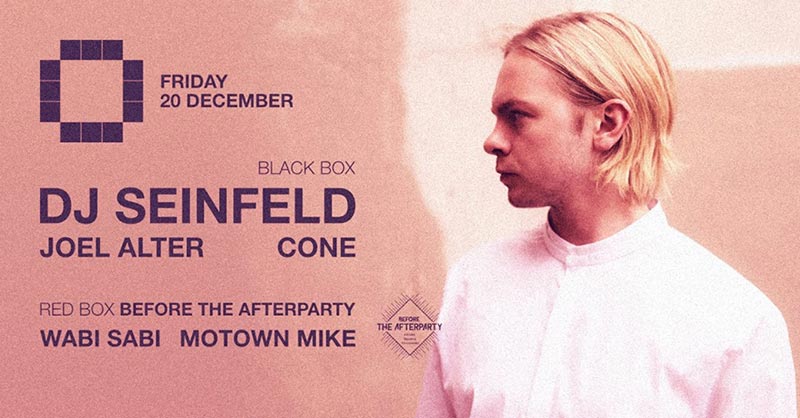 Armand Jakobsson is the artist known as DJ Seinfeld, Rimbaudian and Birds of Sweden. Under these aliases you’ll find sweeping emotive cuts, verdant dancefloor workouts and discerning dips into jungle and breaks. Releases have come on respected labels including Meda Fury, Ectotherm, UN.T.O and Lobster Fury: the collaborative label from Lobster Theremin and Meda Fury begun for the explicit purpose of releasing his tracks. He won’t be put into a box. His path is his own which was also proven at his DJ-KiCKS release that firmly placed him as a timeless voice in the current music scene, as a DJ and selector whose taste and instincts match the versatility of his productions.

Rising star Cone plays the opening set in Black Box while the Copenhagen based abut Swedish born Joel Alter aka Jor-El ends the night on a high with the closing set.

RED BOX
Before the Afterparty crew will make sure things play together to create a true raver’s paradise in our Red Box. Residents Wabi Sabi and Motown Mike (aka Mike Monkeyboy) will provide the sounds all night.